The ELICITING ENVIRONMENTS | ACTUATING RESPONSE symposium brings to Carnegie Mellon University five designers that are on the forefront of sensory intelligence in architectural design. Visiting from New York and California, they participated in a short series of lectures, moderated panels, and workshops as a means of probing and projecting the effects of their work into the future of design. 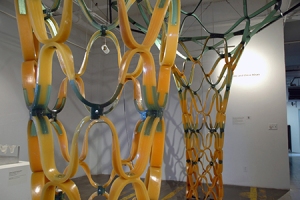 Omar Khan is the Chair of the Department of Architecture at the University at Buffalo, where his research and scholarship spans the disciplines of architecture, installation/performance art and digital media. His projects and teaching explore the intersection of architecture and pervasive computing for designing responsive architecture and environments. At Buffalo he co-directs the Center for Architecture and Situated Technologies and is an editor of the Situated Technologies Pamphlet Series. He received his Bachelor of Architecture degree from Cornell University and a Master in Design and Computation from MIT where he was a member of the Aesthetics and Computation Group at the MIT Media Lab: Lecture link. 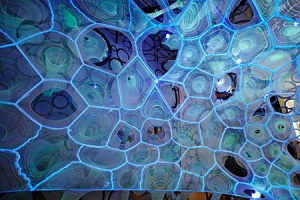 Jenny Sabin’s work is at the forefront of a new direction for 21st century architectural practice — one that investigates the intersections of architecture and science, and applies insights and theories from biology and mathematics to the design of material structures. Sabin is Assistant Professor in Design and Emerging Technologies in Architecture at Cornell University. She is principal of Jenny Sabin Studio, an experimental design studio based in Philadelphia, and director of the Sabin Design Lab at Cornell AAP, a hybrid research and design unit. In 2011, Sabin was named a USA Knight Fellow in Architecture, 1 of 50 artists awarded nationally by US Artists. Currently, her work is exhibited in the internationally acclaimed 9th ArchiLab titled Naturalizing Architecture, at FRAC Centre, Orleans, France: Lecture link. 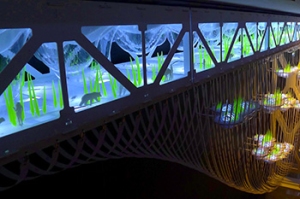 Jason Kelly Johnson is a founding design partner of Future Cities Lab, an experimental design and research office based in San Francisco, California. Working in collaboration with his partner Nataly Gattegno Ho, Jason has produced a range of award-winning projects exploring the intersections of design with advanced fabrication technologies, robotics, responsive building systems and public space. Future Cities Lab is at the forefront of exploring how advanced technologies, social media and the internet of things will profoundly affect how we live, work, communicate and play in the future. Their approach to design and making, which has been described as “high performance craft”, is also deeply experiential, interactive and materially rich. Future Cities Lab is an interdisciplinary studio employing an adventurous team of designers, architects, technologists, digital craftspeople, urban ecologists and more.  Jason is currently an Assistant Professor at the California College of the Arts (CCA) in San Francisco: Lecture link. 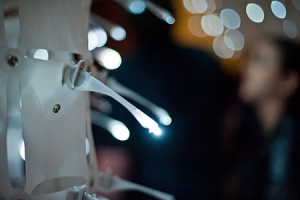 Michael Szivos is the Principal and Founder of SOFTlab, a design studio based in New York City.  In 2012 SOFTlab was awarded the Architectural League Prize for Young Architects & Designers and previously in 2010 the studio was selected for the New Practices New York award by the AIA Chapter of New York along with 7 other young studios. Michael is also an assistant adjunct professor at  Graduate School of Architecture, Planning and Preservation at Columbia University and an adjunct professor at the School of Architecture at the Pratt Institute: Lecture link. 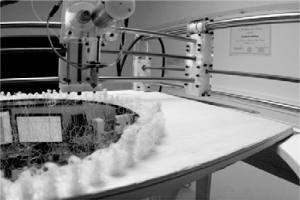 Andrew Atwood is a principal of First Office, an architecture practice founded with Anna Neimark in downtown Los Angeles. Atwood is currently Assistant Professor of Architecture at UC Berkeley where he offers design studios and visual studies seminars. Previously, he taught at both SCIArc and USC. First Office’s work has been exhibited in the United States and abroad, including the Beijing Biennale, the Pacific Design Center, the Storefront for Art and Architecture, the SCI Arc Gallery and the MAK Center, Los Angeles, among others. With Neimark he has published articles in Project Journal, ThinkSpace Pamphlet, Perspecta and a forthcoming issue of Log. Atwood holds a B.A. in Political Science from the University of Richmond and an M.Arch from Harvard. First Office has completed projects in San Francisco, Afghanistan and Los Angeles: Lecture link.

Dana CUPKOVA | EPIPHYTE Lab | Carnegie Mellon University (CMU) Dana Cupkova holds a Lucian & Rita Caste Assistant Professorship at the Carnegie Mellon School of Architecture and is a design principal of EPIPHYTE Lab, an architectural design and research collaborative. Her work engages the built environment at the intersection of ecology, computationally driven processes, and systems analysis and has been previously supported by the NYSCA Grant, the Center for Architecture Foundation Arnold W. Brunner Grant, the Cornell University Faculty Innovation Grant, The Architectural League of NY and ACADIA.  Dana received Dipl. Ing.Arch. from the Slovak University of Technology and MArch from UCLA, where she was awarded the Unrestricted University Fellowship, the Mimi Perloff Award, and the Kate Neal Kinley Memorial Fellowship: EE|AR Symposium panel discussion link.

Frank MELENDEZ | Melendez Design Studio | Carnegie Mellon University (CMU) Frank Melendez has recently been awarded the George N. Pauly, Jr. Fellowship, joining the Carnegie Mellon University School of Architecture faculty as a Visiting Assistant Professor. His research focuses on the advancement of digital technologies in architecture and design. He teaches design studios and seminar courses on responsive systems, interactive environments, algorithmic design, parametric modeling, and digital fabrication processes. His professional experience includes working at the office of Frank O. Gehry & Associates in Los Angeles, California, as well as serving as the Design Director at Urban A&O in New York, New York. Melendez received his Bachelor of Architecture degree from the University of Arizona followed by a Master of Architecture degree from the Yale School of Architecture.