The ELICITING ENVIRONMENTS | ACTUATING RESPONSE symposium included a curated exhibition of experiments, machinic prototypes and artifacts from the invited speakers and others. The exhibit took place in the Carnegie Mellon College of Fine Art’s Great Hall, and directly exposed visitors to interactive installations. 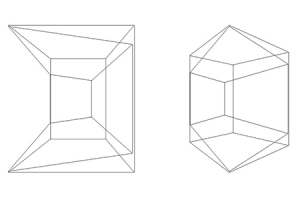 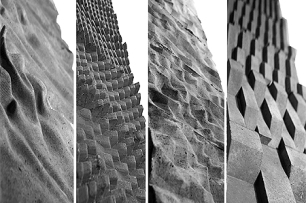 This research project aims to investigate effects of complex geometry on the process of passive heat distribution in thermal mass systems, with the intention of instrumentalizing design principles that effectively engage thermal gradient between the buildings and their environment.  The focus is on a deeper understanding of how specific manipulation of mass distribution to surface area affects the rate of thermal transfer, and how morphology can become an effective agent in energy collection, throughput, and storage within a material mass.

The Metabot Zoo is a menagerie of creative architectural machines. Metabots are semi-intelligent quasi-natural machines that utilize robotics, computer vision and machine learning to inform and enrich their collaborations with humans, animals and their environment. Metabots emerged out of the military-industrial complex but were hacked, reassembled and and reprogrammed for creative purposes. The machines suggest a new form of architectural production – one that is efficient and responsive, but also fantastically unpredictable and slightly neurotic. 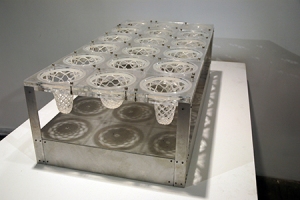 Adaptation is a quality of sentient systems. Since the advent of pervasive computing and distributed sensing it is possible to contemplate architecture that is more responsive to its entire environment and not simply an extension of its users’ inhabitational needs. These models, inspired by W.R. Ashby’s legendary cybernetic machine The Homeostat (1948), suggest designs for a distributed architecture that can self-organize the space around them based on adaptive programming. The Open Columns Homeostat runs on cellular automata rules while the Gravity Screens Homestat runs on changing resonances of the sine curve. Both models are ways of studying performance over time and subjecting a design to evolutionary processes of change. 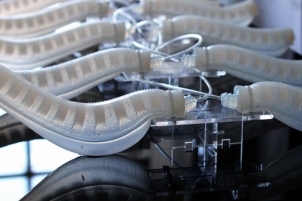 The Adaptive Pneumatic Frameworks research project currently serves as a preliminary prototype that explores the potential for dynamic and responsive pneumatic architectures.  The aim of the research is to investigate a workflow and process for controlling kinetic, pneumatically driven behaviors that fluctuate between a range of parameters and constraints. It adapts current research in soft robotics to explore motor reflexes for pneumatic structures in architecture. The main topics of the research involve; pneumatics in architectural design, cast elastomer components, computation, physical computing and fluidic actuation.

How might architecture respond to issues of ecology and sustainability whereby buildings behave more like organisms in their built environments? The work presented here titled, eSkin, is one subset of ongoing trans-disciplinary research spanning across the fields of cell biology, materials science, electrical and systems engineering, and architecture. The goal of the eSkin project is to explore materiality from nano to macroscales based upon understanding of nonlinear, dynamic human cell behaviors on geometrically defined substrates. To achieve this, human smooth muscle cells are plated on polymer substrates at a micro-scale. Sensors and imagers are then being designed and engineered to capture material and environmental transformations based on manipulations made by the cells, such as changes in color, transparency and pattern. Through the eSkin project, insights as to how cells can modify their immediate extracellular microenvironment with minimal energy and maximal effect are being investigated and applied to the design and engineering of highly aesthetic, passive materials, and sensors and imagers that will be integrated into responsive building skins at the architectural scale.

CHROMAtex (color surface) is a small scale prototype of a project we have produced that showcases the overlap of a number of custom workflows we have developed in the studio. These workflows include new methods of fabrication, assembly, and minimal surface generation. The design of the project itself explores the use of everyday details and the blurring of environmental perception through the use of simple spatial elements such as windows, color, and inversion.